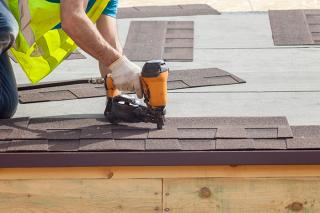 NAICS 444 category retailers showed total sales jump to $44.319 billion in March, according to the Advanced Monthly Sales report from the U.S. Census Bureau. That’s way up from an unadjusted $$33.875 billion in February.

Hardware stores, categorized collectively as NAICS 44413 and as a subset of NAICS 444, were updated for February. Hardware store sales, on an unadjusted basis, declined to $2.392 billion, down 3.6% from $2.481 billion in January. 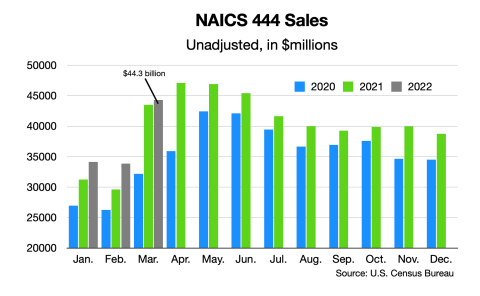 On an adjusted basis, NAICS 444 sales were up 0.5 percent compared to February.

Overall retail sales held steady in March, even in the face of geopolitical turmoil and high inflation.

"While prices soared in March and eroded spending power, shoppers remained resilient and sales were healthy,” said National Retail Federation chief economist Jack Kleinhenz. “Consumers have the willingness to spend and their ability to do so has been supported by rapid hiring, increased wages, larger-than-usual tax refunds and the use of credit.”

Despite occasional month-over-month declines, sales have grown year over year every month since May 2020, according to Census data.

NRF’s calculation of retail sales – which excludes automobile dealers, gasoline stations and restaurants to focus on core retail – showed March was unchanged seasonally adjusted from February but up 4 percent unadjusted year over year. In February, sales were down 0.7 percent month over month but up 13.2 percent year over year.