Five things to know about 84 Lumber

Five things to know about 84 Lumber

Executives at 84 Lumber are on a mission – first to grow the business, and second to emphasize to customers, vendors and any other stakeholder that today’s business is growing in ways beyond the earnings statement.

The privately held building supply dealer will celebrate its 60th Anniversary later this year, operating in 30 states with more than 250 stores. That’s down from its peak of more than 400 stores before the housing market crash.

What followed the crash was a difficult period of retrenchment, described by Frank Cicero as “the dark ages” of 2009 and 2010. But those days are disappearing in the company’s rearview mirror.

“We very quickly right sized the company and got back to profitability in 2011,” said Frank Cicero, chief operating officer. Since then, 84 Lumber has entered recovery mode.

Cicero talked at length with HBSDealer about what lies ahead for the privately held pro dealer. Here are five key takeaways.

• Expansion plans. The company’s Riviera Beach, Florida, location – recently purchased back from Tamko -- includes retail and manufacturing facilities, and is built as a sort of prototype. “That model had everything under one roof, and gives our guys the ability to be number one in the market.”

Recent openings occurred in Savannah, Georgia and St. Augustine, Florida. Retail and manufacturing are planned for Holbrook, Massachusetts, and Riverhead, New York. But the big push is Westward. A dozen new locations are in the works for the next 18 months, including key market expansions in Houston, Dallas and Austin.

• Long-distance deals. The company announced its involvement in housing projects in Korea. But that’s not the only long-distance relationship. It has also supplied developments in Mongolia and in China. “It’s a segment of the business that’s very challenging but again it just goes to show our willingness to show innovation,” Cicero said.

• New faces. Among the company's high-profile hires and promotions are the following executives.

“These four guys are really tuned in to getting done what needs to be done,” Cicero said.

• More-than-a-lumberyard mantra. According to Cicero, prior to the “dark ages,” 94% of 84 Lumber’s business was to single-family residential construction. The new 84 Lumber has a much broader service offering. “Now your seeing installed services, commercial business and custom business,” he said.

One example, Tiny Living by 84 Lumber, riding the millennial friendly tiny (200 sq. ft.) home movement. The program was the idea of Owner Maggie Hardy Magerko, largely to bring awareness of the brand to younger customers.

“How can we be more innovative in this industry?" said Cicero. "That’s going to be the new going-forward side of our company.” 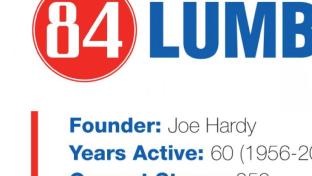 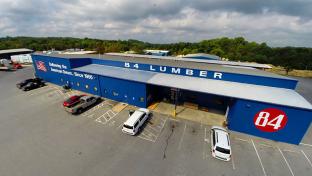 News
84 Lumber intends to celebrate at 60