Lowe's announced all stores in the United States and Canada will be closed on Easter Sunday, April 4.

The retailer said the decision was made to show appreciation to its 300,000 associates' “continued dedication.” This marks the second year in a row that Lowe’s has chosen to close its stores on Easter Sunday.

"As we near the one-year anniversary of the pandemic's impact, we continue to recognize and thank our more than 300,000 associates who have demonstrated, again and again, their passion and commitment to serving our customers," Marvin Ellison, Lowe's president and CEO, said in a statement issued by the retailer.

"Easter Sunday is an opportunity to spend time with loved ones. As we did last year, we'll work to ensure associates have the opportunity to make up scheduled hours to avoid any loss in pay resulting from this well-deserved day away from work," Ellison added.

In January, Lowe's announced its seventh bonus or special payment for its hourly front-line associates with an additional $80 million in discretionary bonuses. The seventh pandemic-related bonus brought the company's total commitment to associates to more than $900 million. The company has invested nearly $1.3 billion in COVID-related support for its associates, communities and store safety since the pandemic began.

Lowe's also said that it is currently hiring more than 50,000 seasonal and full-time retail associates, building on the more than 90,000 associates hired into permanent roles over the past year. 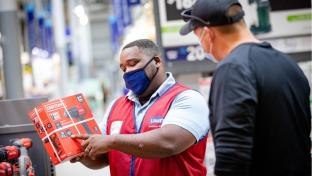 The home improvement kingpin plans to pay another $80 million in bonuses to front-line associates.