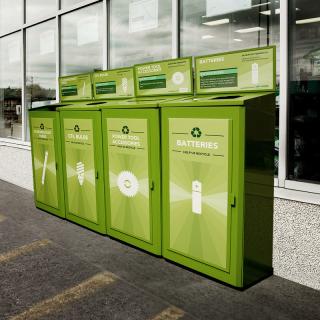 A battery recovery station at a Lowe's Canada store.

Lowe's Canada has been recognized for its commitment to battery recycling.

The Canadian division of Lowe’s Companies has received its eighth Leader in Sustainability award from Call2Recycle. The program recognizes the contributions of companies that divert batteries from ending up in landfills.

In 2019 alone, about 25,600 pounds of batteries were recovered through collection units installed in Lowe's, RONA, and Reno-Depot corporate and affiliated stores across the country.

"We are pleased to offer our customers a place where they can easily and safely dispose of their used batteries," said Jean-Sébastien Lamoureux, senior vice president of public affairs, asset protection and sustainable development at Lowe's Canada. "Our battery recycling program is part of a larger plan aimed at reducing the environmental impact of our operations. As a large company, we firmly believe it is our responsibility to do the right thing to protect the natural heritage of future generations and we plan on continuing to launch meaningful programs and initiatives to this end."

According to Joe Zenobio, president of Call2Recyle, the Lowe’s Canada network has contributed to the diversion of 953 tons of batteries from landfills since 2001.

"We are grateful to count on the support of this major partner that allows us, year after year, to hit new collection target records and, consequently, contribute to the protection of wildlife, the environment, and our communities,” Zenobio said.

Other sustainability efforts undertaken by Lowe’s Canada include recovering paint, CFL bulbs and fluorescent tubes in addition to recycling cardboard, paper, plastic, wood, and metal. Lowe's Canada also set a target to reduce its greenhouse gas emissions to 40% below its 2016 levels by 2030.

The retailer operates or services more than 470 corporate and independent dealer stores across Canada.