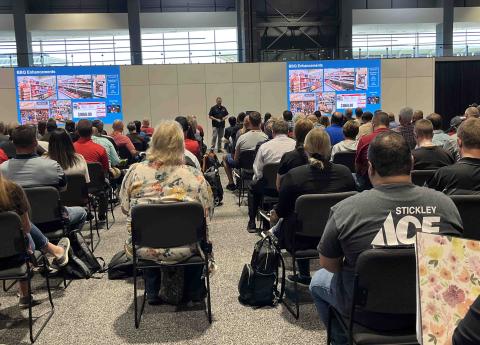 “Amazon is coming,” said one of the session speakers.

Those words were attention-getters and were also meant to indicate a big player was eyeing the Google paid search arena that Ace Hardware currently uses for its Local Lift program for dealers.

There were several takeaways from the many educational sessions at the recent Ace Fall Convention held in Chicago’s McCormick Place south hall. Here are the some of the most memorable highlights from those sessions:

“Local Lift is a local Google paid search program that Ace can use,” said Tom Lynch, senior vice president at Location 3, a firm that partners with Local Lift, speaking to an area crowded with show attendees.

“There are almost 3,000 participating stores, as of the first half of 2022,” he said. “In the first half there were 65,000 online orders through the program, and it generated more than $4 million.” He added: “Amazon is pushing hard into this area.”

On finding the “magic” of B2B success, one of his panelists, Sarah Davis, business development manager at Westlake Ace Hardware headquartered in the Kansas City area, said, “Commercial customers shop at Ace for the same reasons as consumers, to get that friendly, small-town feel. The only difference is you’re asking questions about their business needs, while you provide them the same great service.”

You should constantly go after new B2B customers, Garcia said, because customers come and go but some will stick, and those that do stick build that “magic” relationship you seek.

Engaged employees are highly involved in the business. That was the message at another session titled: The Future of Employment Engagement.

Alok Patel, from Gallup, asked the crowd: “What does it mean to be engaged?”

Using devices at their seats, audience members answered in a word-cloud that appeared on a big screen in front for all to see. The phrases that appeared were: “Interested” “Motivated” “Be happy” and “Listen to employees.”

“But managers and owners are the key to high engagement,” he said. Two of the “engagement points” the employee survey showed, he said, were “creating trust and having a best friend at work.”

The audience was engaged too, asking questions and discussing until the session concluded.