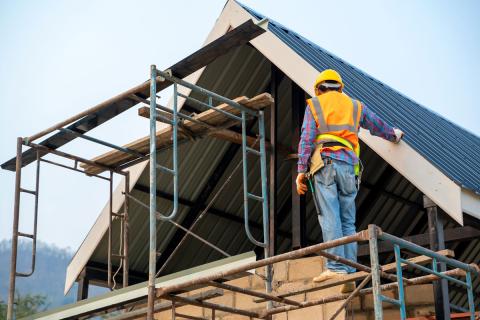 Housing starts in May fell 14.4% to a seasonally adjusted annual rate of 1.549 million from the revised April rate of 1.810 million.

Total starts in May are also 3.5% below the May 2021 rate of 1.605 million, according to the the latest Monthly New Residential Construction report, released this morning by the U.S. Census Bureau and the U.S. Department of Housing and Urban Development.

The May rate for units in buildings with five units or more was 469,000, plummeting 26.8% from the previous month.

Rising mortgage rates, inflation, and a lack of affordable homes are keeping potential buyers on the sidelines at this stage of the game.

Yesterday, the National Association of Home Builders reported that builder confidence in the market for newly-built single-family homes fell two points in June to a reading of 67. The reading, which measures builder confidence, marks the sixth straight monthly decline and the lowest HMI reading since June 2020.

“Single-family home building is slowing as the impacts of higher interest rates reduce housing affordability,” said Jerry Konter, chairman of the NAHB and a home builder and developer from Savannah, Ga. “Moreover, construction costs continue to rise, with residential construction materials up 19% from a year ago."

Privately‐owned housing units permits in May were at a seasonally adjusted annual rate of 1.695 million, dropping 7% from the revised April rate of 1.823 million.

"As the market weakens due to cyclical factors, the long-term housing deficit will persist and continue to frustrate prospective renters and home buyers," Konter said.

“In further signs that the housing market is weakening, single-family permits are down 2.5% on a year-to-date basis and home builder confidence has declined for the last six months,” said NAHB Chief Economist Robert Dietz. “Due to the acceleration in construction activity in recent quarters, housing completions are rising. Single-family completions were up 8.5% in May 2022 compared to May 2021 as inventories rise.” 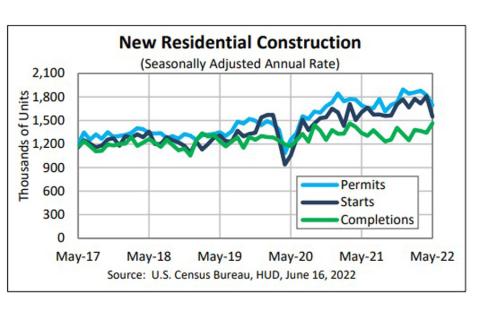 Click here for the full Monthly New Residential Construction report for May 2022.

Here is a breakdown of how housing starts and permits performed regional basis in May 2022 compared to the prior month: