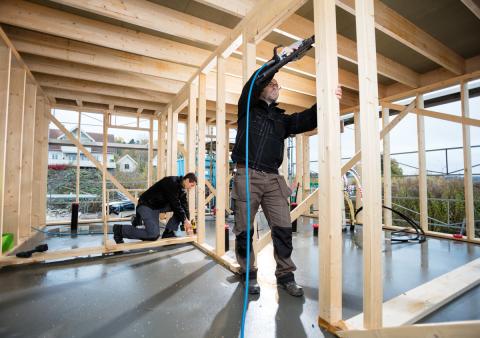 While builder confidence continues to sag, housing starts made an unexpected move in August.

Privately-owned housing starts increased 12.2% to a seasonally adjusted annual rate of 1.575 million from the revised July estimate of 1.404 million.

The latest figure, released this morning by the U.S. Census Bureau and the U.S. Department of Housing and Urban Development, is 0.1% below the August 2021 rate of 1.576 million.

Single-family housing starts in August were at a rate of 935,000, moving ahead 3.4% from the revised July figure of 904,000. Prior, single-family starts had fallen for five straight months.

“Single-family production is running at a weakened pace due elevated mortgage rates and high construction costs that have led to a major slowing of the housing market and exacerbated housing affordability,” said Jerry Konter, chairman of the National Association of Home Builders (NAHB) and a home builder and developer from Savannah, Ga. “The slowdown in the single-family market has been reflected in our builder surveys, which have posted declines every month in 2022.”

Total housing permits decreased 10% to a seasonally adjusted annual rate of 1.517 million compared to the revised July rate of 1.685 million.

“Today’s housing starts report is more evidence that the housing recession is deepening for the single-family market, with the pace below 1 million for the last two months,” said Jing Fu, NAHB’s director of forecasting and analysis. “Expected additional tightening of monetary policy from the Federal Reserve, falling builder sentiment and a 15.3% year-over-year decline in single-family permits points to further weakening for the housing sector. The one bright spot is multifamily construction, which remains very strong given solid demand for rental housing.” 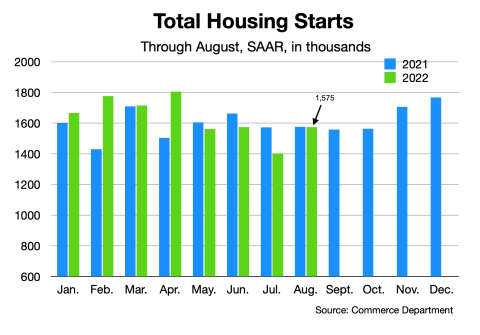 Here’s how August 2022 starts and permits break down by region compared to the prior month:

The HMI, which measures builder confidence, fell three points in September to 46, the lowest level since May 2014 with the exception of the spring of 2020.

The NAHB has attributed the decline to a combination of elevated interest rates, persistent building material supply chain disruptions, and high home prices all taking a toll on affordability.

Better days for housing could be ahead though.

"There was a housing shortage of around 5 million homes before the onset of the pandemic," said Lawrence Yun, chief economist of the National Association of Realtors. "That shortage is not going away soon. The near-term single-family outlook is complicated due to high mortgage rates. But the long-term outlook for homebuilders is bright due to the need to build more to fully relieve the housing shortage.”