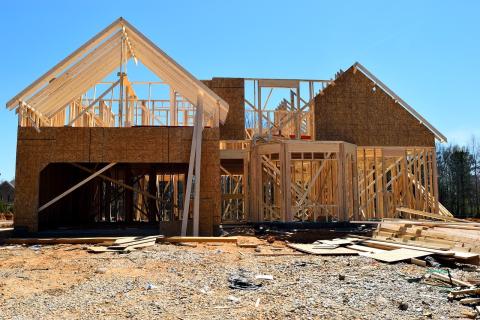 Housing starts wrapped up 2020 with another show of strength.

Privately-owned housing starts increased 5.8% to 1.669 million in December 2020 above the revised November estimate of 1.578 million, according to the latest Monthly Residential Construction report released this morning by the Census Bureau and Department of Housing and Urban Development.

Single-family housing starts in December were at a rate of 1.338 million, which is 12% above the November revised rate of 1.195 million.

Conversely, multifamily starts decreased 13.6% in December to a 331,000 annual rate compared to the previous month. On a year-over-year basis, multifamily production fell 38.7%. 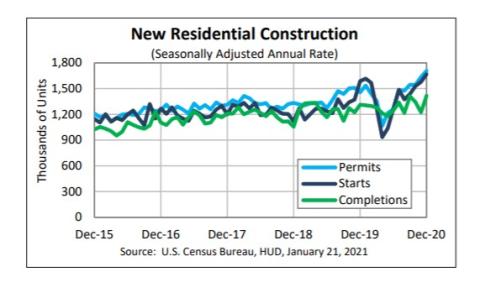 Residential building permits in December were at a seasonally adjusted annual rate of 1.709 million, increasing 4.5% from the revised November rate of 1.635 million.

Single-family authorizations in December were at a rate of 1.226 million, rising 7.8% above the revised November figure of 1.137 million.

About 1.452 million housing units were authorized by building permits in 2020, marking a 4.8% climb from 1.386 million permits authorized in the prior year.

Multifamily permits diminished by 3% percent in December compared to the previous month and are down 6.6 percent% from a year ago.

Lawrence Yun, chief economist of the National Association of Realtors, said the latest report could be an indication that a growing housing supply shortage could be over.

“Home construction finished the year with the biggest bang since 2006 with 1.669 million units started for construction in December (annualized). That means the worst of the housing shortage could soon come to an end,” Yun said.

But Yun says more inventory is needed to lessen the heat of multiple offers on homes and the consequent frustration potential homeowners suffer after multiple losing bids. The economist also noted that consumers, in light of the pandemic and work-from-home flexibility, have shown a preference for larger-sized homes.

Here’s how housing starts  reak down by region: