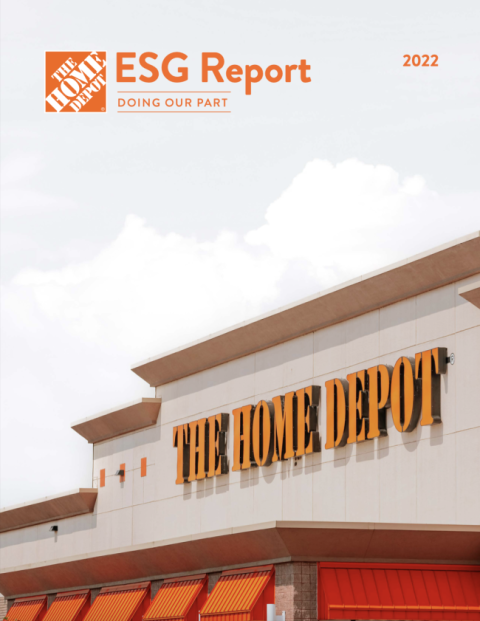 The Home Depot has released 2022 Environmental, Social, and Governance Report (ESG), which reveals how the home improvement giant is doing its part as a corporate citizen.

According to The Home Depot, the retailer reduced its combined Scope 1 and 2 carbon emissions by approximately 172,000 metric tons in 2021, equivalent to taking more than 37,000 cars off the road for a year.

The company reduced its electricity consumption by approximately 11% percent year-over-year in U.S. stores while at the same time opening five new stores.

When it comes to company associates, the report points out that 90% of The Home Depot’s U.S. store leaders began their careers as hourly associates.

Additionally, The Home Depot paid its non-management associates a company record of about $739 million.

The Home Depot spent $3.3 billion with Tier I diverse suppliers in 2021 and announced a goal to spend $5 billion annually by 2025.

The Home Depot Foundation has also crossed a milestone of more than $400 million contributed to veterans’ causes since 2011 while making progress on its skilled trades training initiatives and responding to communities struck by natural disasters during the year.

“Our team knows that an effective ESG strategy works best when we all work together – our associates, nonprofit partners and supplier partners – to generate the most positive impact possible,” The Home Depot CEO and President Ted Decker said. “The progress we’ve made in focusing on our people, operating sustainably and strengthening our communities is a testament to the hard work and dedication of our associates. I want to thank them and all our partners for their commitment to helping us do our part to take care of our customers, communities and each other.”

The full 2022 ESG Report from The Home Depot is available here.

A video featuring the company's ESG approach and achievements, with an introduction from the CEO, can be viewed here.