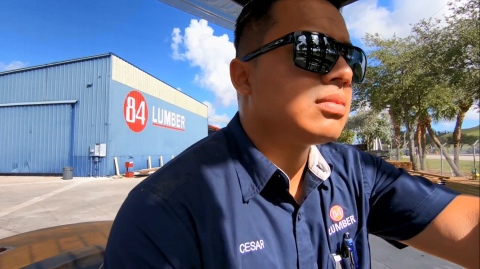 Cesar Gonzalez, a California native whose parents immigrated from Guatemala, never dreamed that he would one day manage an 84 Lumber store, let alone serve as a role model for countless young Hispanic men and women in his community.

Today Gonzalez is the general manager at 84 Lumber’s Fort Lauderdale, Fla. location, which has a 40-year history along with a loyal customer base.

Gonzalez has managed the store for five years while playing an integral role in supporting the success of the store and connecting with its Hispanic clientele.

Growing up in Los Angeles, Gonzalez watched as his parents, who had arrived in the U.S. with nothing, rented a small closet for the family to sleep in. Working countless hours, they would ride their bikes to and from work..

When it came time for school, his parents enrolled him and his siblings in a bilingual school, so that they could learn both English and Spanish – something he said has served him well in his role as general manager for 84 Lumber.

“My bilingual education paid off,” Gonzalez said. “Fort Lauderdale is a melting pot of all different nationalities. Three out of five customers coming in our store speak Spanish, so the fact that I speak and write English and Spanish fluently is part of why I've been successful here.”

Gonzalez notes that when he first started as a general manager, he didn’t have a salesman at the store.

Now the location has three outside sales associates who all speak Spanish. This has helped drive the store’s success, according to Gonzalez. Most of the branch's customers are walk-ins, so the ability to communicate with those Spanish-speaking customers is key. 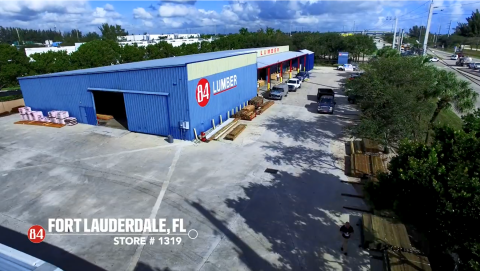 By embracing and preserving his culture, Gonzalez said has been able to carve a successful career for himself, as well as those in the community.

“I was 20 years old when I started working in the yard at 84 Lumber and juggling college part-time,” he said. “A friend of mine who was in sales with the company, had advised me on a career path that I could take should I enter the management trainee program. I am so glad I took the chance. I love it here.”

Gonzalez’s success has not only afforded him a life he is proud to share with his wife and two toddlers but also has inspired him to one day mentor those growing up in similar circumstances as him.

“I grew up in a rough neighborhood in Los Angeles, and I saw a lot of terrible things,” Gonzalez said. “I didn't have anyone to really push me towards the positive. I hope that my story of success can motivate a young person that wants to get out of a tough situation and work their way up like I did.”

To support that growth, 84 Lumber is looking to hire associates like Gonzalez in Florida and stores around the nation. The company does not require a degree or prior experience to apply, and it encourages bilingual associates to consider a career with 84 Lumber.

“As a family-owned company, 84 Lumber is committed to helping our associates build a long-term career with us. We are proud to say that 95 percent of our store managers started in our manager trainee program," said 84 Lumber Area Manager, Jason Skaggs.

Based in Eighty Four, Pa., 84 Lumber operates more than 250 locations in over 30 states.