Here’s the list of LBM dealers and their PPP loans

Here’s the list of LBM dealers and their PPP loans

There were 3,464 building material and supplies dealers that received loans in excess of $150,000 through the Paycheck Protection Program. The names of the companies can be found in the attachment below, along with the loan-amount range, and the number of “jobs retained” at each company.

The list came about through an effort toward transparency on the part of the U.S. Small Business Administration and the Treasury Department. Earlier this week, the SBA released detailed loan-level data regarding the loans made under the PPP – all 4.9 million of them.

The PPP was created as an incentive for employers to keep paychecks flowing -- 100% of the loans can be forgiven if the recipient keeps all employees on the payroll, and meets other criteria.

In the announcement Tuesday, the SBA declared the program “an indisputable success for small businesses.”

SBA shared a laptop-crashing spreadsheet of the more than 660,000 companies that received a loan in excess of $150,000. The list included the loan amounts expressed as one of the following ranges:

HBSDealer has extracted a file that pares down the list to 3,464 recipients that are classified as NAICS 4441 -- building material and supplies dealers, including hardware stores, home centers and lumberyards. The list is arranged with the companies receiving the largest loans at the top.

It can be assumed that many more NAICS 4441 code businesses received PPP loans in an amount less than $150,000. The SBA offered more information about those smaller loans on its web site, but it did not identify the loan recipients by name. 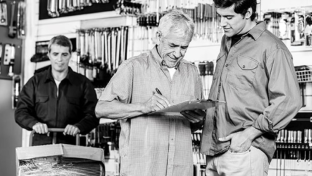