Story time: Encounters in the Aisles

Story time: Encounters in the Aisles

If you take all the helpful, heart-warming human-interest stories that occur in or around a hardware store and compile them into a book, then you might be onto something – at least a cult classic, maybe even a best-seller.

That’s the thinking of Karen Munson, co-owner of Escalante (Utah) Home Center, located in the wide open spaces of southern Utah surrounded by the raw beauty of the Grand Staircase Escalante National Monument. Her idea to gather and chronicle hardware-store human interactions came to her shortly after she offered a hug of encouragement to a customer. “It had nothing to do with abrasives in aisle two,” Munson said. “It was personal. And I remember dancing down the aisle singing, 'I love what happens in the aisles.’”

That’s the kind of enthusiasm Munson is bringing to her literary project, the working title of which is “In the Aisles.” So far, Munson – who is already the author of a children’s book titled “Tryston’s Spoons” – has about 30 stories saved in her notebooks. And she’s shooting for about 100 short stories (about 700 words each), unless her publisher advises her otherwise. She says the material is plentiful, given the almost daily frequency of memorable encounters.

“I’m a writer and a hardware store operator,” said Munson, a member of the Do it Best co-op. “I just love the magic that happens in the aisles -- stories about warm and engaging celebrations of humanity with all its quirks. That’s what I’m going for. I want to collect and write and capture all of this magic. I am biased. I love rural, I love small. I love all the intimate connections with all of our customers.”

For instance, there’s the story about the lessons that professional actor Ted Levine (who played a supporting character from the long-running television show “Monk,”) gave to Munson when she was preparing for her role as a man in a local community theater production. “It was right there in aisle 12,” she said. “He taught me to swagger, to gesture, and he gave me the confidence I needed to play that role.” Escalante Home Center
Then there’s the story about the elderly customer who needed an exotic hearing-aid battery at closing time on a weekend. The store didn’t have it, but a customer who overheard the conversation volunteered to drive home and return with the desired product, allowing the man to communicate with his son during their adventure into the wilderness. The good Samaritan just happened to have the exact same hearing aid as the elderly customer. “It was more than just a helpful gesture,” Munson said. “She gave him the gift of time with his son.”

And then there was the time that a customer suggested to Munson that someone like Matt Graham, the Discovery Channel star from “Dual Survival,” come to Escalante and teach tourists survival skills in the beautiful but dangerous landscape. The following conversation ensued:

Munson: "Are you a big fan of Matt Graham?"
Customer: "Absolutely, I’ve seen every one of his shows."
Munson: "Would you like to meet him? He’s in aisle four."

And so he was, marking one of many amazing and happy coincidences in the 5,000 sq. ft. hardware store.

Why do hardware stores generate these kinds of stories? Munson reasons that it is partly because hardware stores and the people who work in them are “exquisite problem solvers.” And also, hardware stores are places where people come together with a mindset of helping each other or finding help.

“I am just passionate about sharing the face to face interactions we have in locally owned retail stores and the relationships we build with our customers,” she said. “Fun stuff happens in the aisles that has nothing to do with the stuff the customer comes in to purchase.”

Readers are encouraged to share their own amusing or inspiring stories by contacting Karen at [email protected] please use the subject line “In the Aisle stories.”

HBSDaily
At Do it Best, a 'Celebration of Excellence' 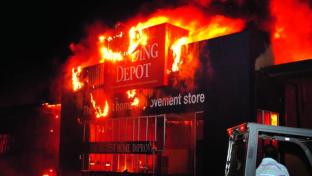 News
The spirit of Do it Best