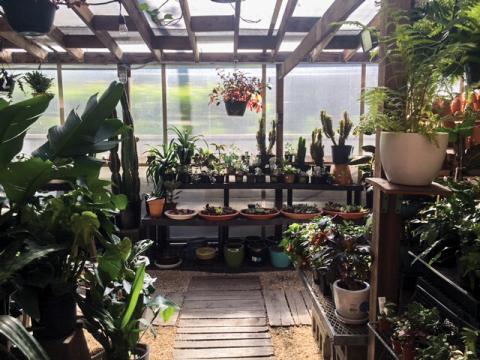 There are few communities in America that have undergone a more visible, oft-scrutinized, and drastic demographic upheaval than Brooklyn’s Williamsburg neighborhood. But one young retailer has successfully navigated the complex task of maintaining his father’s legacy and positioning his store for future growth in this environment.

It’s perhaps for this reason he’s one of this year’s Young Retailer of the Year honorees. But Joseph Franquinha, owner of Brooklyn’s Crest True Value Hardware and Urban Garden Center, founded in 1962, is also in possession of a “creative fire” (and a visionary sense for what makes that whole “Urban Garden Center” part successful).

One of Franquinha’s most notable contributions to the store since taking over from his father and his uncle has been the addition of what is now a 5,000-sq.-ft. garden center with a year-round greenhouse.

Williamsburg had already changed a lot by the time the recession hit, but it was at that point that the usual stable of plumber and electrician customers stopped coming in. Instead, the store began to see an influx of DIYers.

“The writing was on the wall to start catering more to the DIY set, and also use this opportunity to maybe differentiate from the normal stock that a hardware store usually carries,” he said.

That’s where the garden came into play. In 2007, he was trying to convince his father that it was a good idea, but he wasn’t sold on the concept. When his father took his first long vacation in 25 years, he began to build the garden center anyway — putting up beams, a pergola and an overhang.

“I thought I was going to get a pat on the back or a pink slip, and I got neither,” he said. “He just said, ‘You better make this work.’”

Now, Franquinha said, the garden comprises roughly one-third of the store’s revenue. When they renovated the store recently, they focused primarily on plants and paint, two categories Franquinha describes as “Amazon-proof.”

“You have to touch them. You have to talk to someone about how much light you have to offer,” he said. “Paint is very much the same way.”

Of course, this breath of new life isn’t only happening at the local level. The leadership of John Hartmann has inspired confidence in Franquinha, who describes the new CEO’s enthusiasm as having a “positive domino effect.”

More than anything, Franquinha feels the imperative of “messing with the formula” of retail at a time when the average hardware store owner is 68 years old (and might feel a lesser sense of urgency to be creative).

It’s experimentation that has allowed Crest True Value to remain relevant, and part of the reason Franquinha, who has an acting background (and was once a professional mascot at Madison Square Garden), was able to satisfy his creative urges while running the family business.

The store was actually already doubling up as a neighborhood art space since his father’s day. In the 90s, a local artist named Gene Pool asked his father for window space to showcase his work, and before they knew it, local artists were participating in the Crest Hardware Art Show.

“My dad always joked that the only way you could tell the difference between hardware and art was the price tag,” he said. “And this was his way of establishing a relationship with the new wave of residents. You had the contractor and electrician right beside the art history major appreciating art in Aisle 2, and Crest became common ground for that.”

But there’s also a strong sense of what it means to not throw out the baby with the bathwater.

“There’s a lot to be said for not bending too much in [the new] direction,” he said. “I could increase margins and only carry certain stuff, but you’d alienate a lot of the people who got you to this point.”