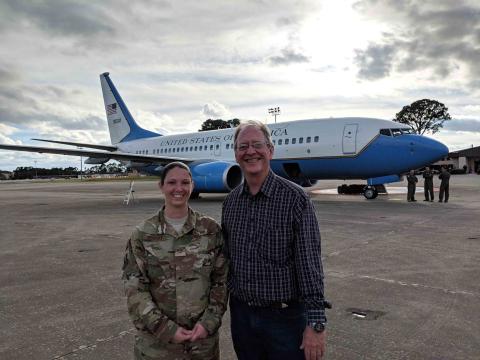 James Burns with TSgt Murry at Hurlburt Field, Florida, at a Medal of Honor ceremony for MTSgt John A. Chapman. The plane was dedicated that evening to MTSgt Chapman.

This is the story of one hardware store owner who wanted to do more for his town.

James Burns owns Burns Do it Center in Clovis, New Mexico, a town of about 40,000 residents located in the eastern part of the state near the Texas border.

After his son joined the Air Force, he decided to volunteer with a local support group for nearby Cannon Air Force Base to help mentor first assignment airmen. Burns started the group Your New Mexico Home to match them with local families who would take them in and make them a part of their family.

He also joined The Committee of 50, a military affairs committee within the Clovis/Curry County Chamber of Commerce.

He described The Committee of 50 this way: “As liaison between Cannon Air Force Base and the Clovis community, it is our job to promote Cannon and support its mission in any way that we can. From lobbying at the federal, state and local levels on behalf of Cannon, to supporting local troops through annual events such as Cannon Appreciation Day and the Single Airmen’s Christmas Party, our focus is to support and help grow the mission at Cannon.”

His business, Burns Do it Center, includes three locations in Eastern New Mexico and West Texas. Each location offers different products because of the markets they serve. Burns said that one is mostly a lumberyard, another is a rural farm and ranch business, and the third has tools available for rent, as well as a variety of mattresses, flooring, guns, and a large grilling and barbecue section.

The Committee of 50, he said, operates much the way a booster club supports a football program.

“We are here to support the men and women serving our country while stationed at Cannon,” Burns said. “We travel to Washington DC to be sure our congressional representatives understand the important roles Cannon fulfils both in the defense of our country and the positive presence in our region.”

The Committee actively works to promote the importance of Cannon to the New Mexico state government. In addition to those roles, the committee supports many events to bring benefits to local servicemembers.

But Burns also is involved in another program – one he launched.

The Your New Mexico Home (YNMH) program pairs single airmen living on base with civilian host families from Clovis and Portales, creating an avenue to form friendships and gather support outside of their formal work environment.

“We initially launched YNMH on March 4, 2020 – unfortunate timing for a program that mainly tries to connect families and airmen in person. So far, we have eight host families and 11 airmen participating but we expect that number to grow now that the program isn’t facing as many challenges and restrictions,” said Burns.

Here is a link with information about the program: https://www.clovisnm.org/ynmh/

For busy hardware store owners, it can be hard to find time to fit in local volunteer work and still run a business effectively. Burns finds a way.

“It is important for any successful business to give back to the community,” he said. “I am fortunate to have a dedicated staff that can operate very well in my absence, and although it’s hard for me, I do my best to delegate.”

The business has a relationship with local military personnel.

This Do it Best member offers a rewards program for all its customers, and it doubles the rewards for military members. Additionally, several squadrons at Cannon participate in their annual Egg Fest fundraiser.

The owner said, “it’s always a fun day and the money raised goes to a local charity called Angel Arms. They purchase airline tickets for airmen who otherwise could not afford to travel to see family for holidays, or for emergencies such as a family death. Burns Do it Center matches the amount raised so it turns out to be a sizable contribution.” 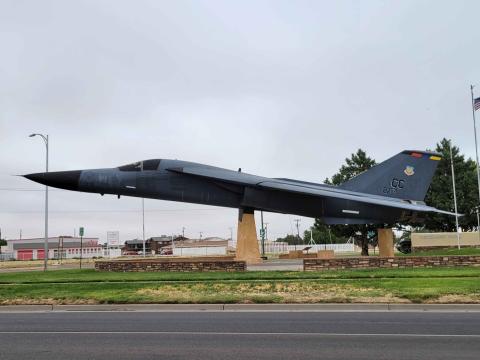 The U.S. F-111 fighter jet with “City of Clovis” inscribed sits in Veterans Park on the edge of town. Note: Cannon AFB is no longer a fighter base and now handles Special Ops.

The volunteer work all hardware owners do with their communities is rewarding. And that is true at this retail business in Clovis. Burns provides an example.

“I was assigned the job of lobbying our state legislature to pass a bill that would require all licensing agencies in the state to allow military spouses to practice their trade in New Mexico. Under the leadership of the military affairs group from Kirtland AFB, we got the bill passed,” he said.

“The state is now required to waive fees and expedite issuance of teaching, professional and occupational licenses for military service members, their families, their dependent children and veterans,” said Burns.

“That was a great victory that will impact military families when they move to New Mexico from out of state.”

Going forward with the Committee of 50 and with the program Your New Mexico Home, this owner sees further work to be done and more growth to come.

Burns plans to continue to be the point person on the Your New Mexico Home program. “As it grows, it will require much more of my time as we have monthly meetings with the participating airmen. I already served as chairman of the Committee of 50 so I don’t anticipate doing that again,” he said.

“The YNMH program will take most of my attention. We had to put the program on hold due to challenges stemming from the pandemic, but now that things are back up and running, we will be able to have an expanded calendar that includes more events and opportunities for participating airmen and host families.”

Based on all he’s learned, this hardware owner and active supporter of his local community provided some tips for other hardware store owners wanting to do more volunteering.

“Get involved with programs in your community and find ones that you really like, then take action,” said Burns.

“I have also learned some things from the Air Force and Rotary about how to run a meeting. A retired colonel one time told me that he was in a squadron that made you put your hand into a bucket of ice water while you spoke to encourage concise reports. I have never suggested that in my meetings, but I do expect people to stay on point and be succinct.”

Many hardware owners devote their time and efforts to supporting their communities and neighbors. This was one example of an owner in New Mexico making a difference – the hardware man who flies high.