A recent “Ace Heartware Stories” video presents Gina Schaefer in her element. In the video, she talks about her team, her community, and her 13-store chain’s policy of giving people second chances. The video is a moving tribute to the power of independent businesses to change communities for the better, and it has more than 112,000 views on Youtube.

Schaefer, a member of the 2020 class of HBSDealer’s Top Women in Hardware & Building Supply and owner of A Few Cool Hardware Stores, shared more inspirational thoughts on her approach to the hardware business during a recent leadership talk with fellow Ace dealers. Here are some highlights.

Her college days and early community service:
“Once a month the [Wittenberg University] football coach would invite me into the science auditorium to give a presentation to the football team about why they have to do their community service. Most of the guys didn’t care. They were really nice guys, but they wanted to be on the field. And here I was, 5-foot-2, in this huge auditorium with enormous men, and I’m telling them why they need to come with me to a soup kitchen or to an elementary school.

“Some of them who I’m still friends with laugh about those memories of me being so bossy. And I also have a lot of fond memories of seeing them grow into their skills as role models.”

Her least favorite job
“It was the job right before I opened Logan Hardware in 1998, in the tech industry. The CEO had $5 million from investors, all from New Zealand. I had to get in touch with all of these absolutely wonderful Kiwis and explain to them that all of their money was gone. That was my least favorite job.” 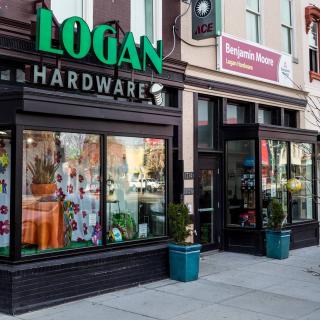 Logan Hardware in Washington, D.C., the origin of A Few Cool Hardware Stores.

The origin of Logan Hardware:
“I came home one day, I had a really bad commute. I told my husband: 'I’m not going to drive any more. I’m not going to work for that man anymore.' (It could have been a woman, but it just happened to a man). And [my husband] said, ‘What are you going to do?’ I said, ‘I’m going to open a hardware store.’ And the rest is history.”

Advice to those considering a career in hardware:
"The first thing I would say is there’s no reason to think it’s any different than going into any other career, and if you’re excited about it, then do it. Something like 70% of businesses are never started because of fear. If hardware is someone’s passion, then do it. Whether you’re a man or a woman."

"Getting a job right out of recovery is a really big deal. And we sort of by accident became that job for this community."

Click on the image to connect with the Top Women in Hardware & Building Supply Linkedin page.

The role of women in hardware and building supply business:
“One of the things I’m most proud of is helping to start the women in retail group at Ace, because I think that there was a disconnect between how many of us are actively involved in the business. Whether we’re owners, business partners HR managers, marketing managers or whatever. And I wanted the women on my team to know that that group existed, and that they were supported in that way.

"I think I’ve had an opportunity in my role to do some really cool things that will help, hopefully, lift up other women in the industry and promote a more diverse population. The hardware world is not a very diverse world, and I really want that to be a bigger part of the future of the business. I think it has to be for us to survive.”

Schaefer’s comments were made during a “Lunching with Leaders” virtual event hosted by Costello’s Ace Hardware, based in Deer Park, N.Y.