Fantech is expanding its line of HERO residential filtration with the addition of the HS300 whole-house HEPA filtration unit.

The HERO HS300 provides full-spectrum air cleaning by removing 99.97% of particles of 0.3 microns and larger from the air circulating within the home. 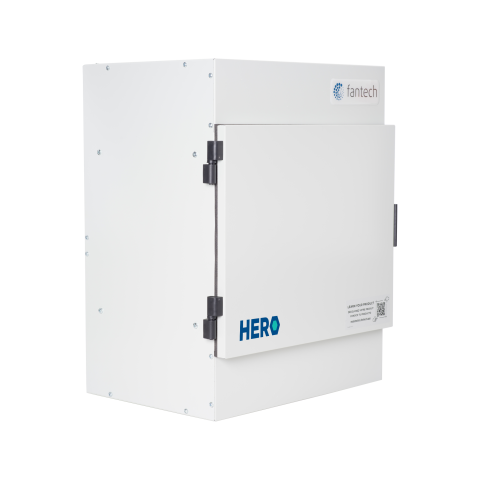 The unit offers two-stage filtration—a pre-filter with carbon and a HEPA filter—that together remove pollutants, allergens, odors, viruses, and more. The pre-filter with carbon will collect up to 90% of particles between 3-10 microns in size, such as pollen, dust, lint, dust mites, and pet dander; the activated carbon also filters out odor-causing particles from the air, such as cooking smells and smoke. The HEPA filter arrests up to 99.97% of particles as small as 0.3 microns in size, such as bacteria, legionella, combustion smoke, milled flour, and mold spores.

The system is designed for installation directly onto the return air plenum of the forced air heating/cooling system; if this type of installation is used, homeowners should run the fan on the forced-air HVAC system continuously to maximize the cleaning effect. The built-in fan and bypass technology on the HS300 ensures that this installation method does not restrict the HVAC system’s airflow. Up to 300 cfm of air is drawn from the return air duct, filtered, and returned upstream.

“From cooking fumes and cleaning chemicals to pet dander and viruses, the air inside the home is incredibly unhealthy, particularly as the building envelope gets tighter and more energy efficient,” said Bruno Poitras, North American Product Manager – IAQ for Fantech. “As homeowners continue to grasp the importance of healthier indoor air, mechanical filtration is both an ideal and necessary solution. The HERO HS300 provides builders and remodelers with a versatile, dependable option for whole-house HEPA filtration to remove pollutants and improve indoor air quality.”

The HERO HS300 has a fully insulated cabinet for quieter operation and offers variable speeds of 200 cfm and 300 cfm. Under normal usage, the carbon filter only needs to be changed every three to six months and the HEPA filter just once a year.