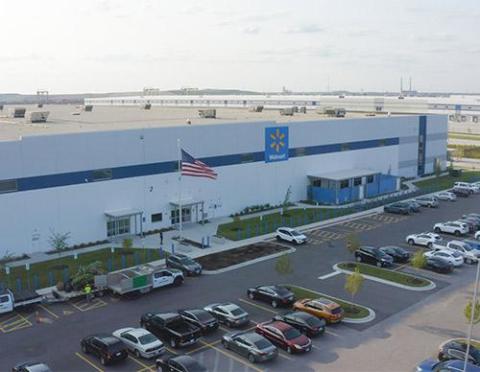 Located in Joliet, Ill., and described as the "first-of-its-kind" for Walmart,  the 1.1 million-square-foot, high-tech facility is the first of four state-of-the-art fulfillment centers dedicated to e-commerce that Walmart plans to open during the next three years. It will store millions of items available on Walmart.com, that are then picked, packed and shipped directly to customers.

First announced in June 2022, Walmart's new next-gen centers will feature an automated, high-density storage system that, among other benefits, will allow the retail giant to double the number of customer orders it can fulfill in a day.

Once completed, the four next-gen centers for Walmart could provide 75% of the U.S. population with next- or two-day shipping. The other three locations are McCordsville, Ind.; Lancaster, Texas; and Greencastle, Pa. The four facilities will collectively employ more than 4,000 associates.

Walmart has been piloting the system, which it developed in partnership with intelligent automation technology provider Knapp, in a Pedricktown, N.J., fulfillment center. The new system streamlines a formerly manual, 12-step fulfillment process into the following five steps:

“Customers continue to expect faster delivery times and we are excited to be able to meet those needs with these new high-tech facilities,” said Karisa Sprague, senior VP Fulfillment Network Operations, Walmart U.S.“The addition of the Joliet next generation FC, paired with our 31 dedicated e-commerce fulfillment centers, will allow Walmart to fulfill online orders for Walmart.com and Walmart+ customers with greater shipping speed in the mid-west region. And, with the holidays around the corner, we’re excited to provide a more seamless experience for our customers.”

The facility is still actively hiring, with a goal to employ more than 1,000 local full-time associates by the end of the year.

Walmart adds supply chain capacity
Walmart has been ramping up its supply chain infrastructure, from expanding its successful pilot of store-based, high-tech “local fulfillment centers” to applying artificial intelligence to the palletizing of products in its regional distribution centers. Recently, the discount giant said it will fulfill online orders placed on Walmart.com from a hub in Salt Lake City, scheduled to open in summer 2022.

The company also plans to build a high-tech distribution center for fresh and frozen groceries in Spartanburg County, S.C., as well as two high-tech supply chain hubs in the Dallas-Fort Worth area and a high-tech center in Lebanon, Tenn. where human associates, artificial intelligence (AI) software, and automated robots working together to ship orders to customers as efficiently as possible.

Headquartered in Bentonville, Ark., Walmart Inc. operates more than 10,500 stores and clubs under 46 banners in 24 countries and e-commerce websites.