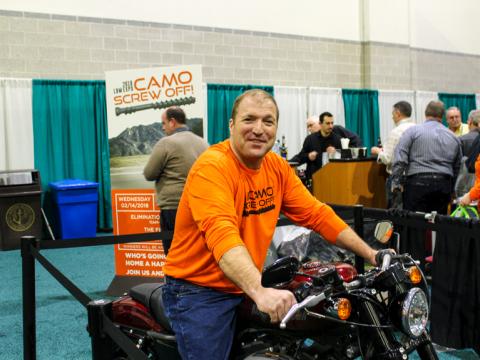 Providence, R.I. — National Nail held its CAMO Screw Off finals at a location that was sure to get attention: the 2018 LBM Expo, being held here through Feb. 16.

Otis Nelson of Modern Roofing & Siding in Ashland, Maine, captured the grand prize while beating out 28 other competitors in the deck-fastening event. Nelson represented his regional dealer — S.W. Collins Co. in Presque Isle, Maine — and won a 2017 Harley-Davidson Roadster motorcycle in the process.

In total, 42 contractors qualified at local lumberyards in the Northeast this past spring and summer.

“The CAMO Screw Off was an exciting event, starting at my lumber dealer S.W. Collins all the way to the finals here in Rhode Island,” Nelson said. “It was a great way to learn more about CAMO’s deck fastening products. I can’t wait to take a cruise on the new bike,” Nelson added.

“We couldn’t have planned a more successful event,” said W. Scott Baker, CEO of National Nail. “The competition was intense — everyone came to win, with many of the contractors practicing for months. We congratulate Otis Nelson who gets to drive home a new Harley-Davidson motorcycle.”

Designed by National Nail to provide hands-on experience with its CAMO Deck Edge Fastening system, the CAMO Screw Off was hosted by CAMO stocking dealers this past summer and fall in a series of deck fastening speed contests. The unique system, comprised of propriety guides, drill bits and fasteners, fastens deck boards on the edge, to give decks a more beautiful, barefoot-friendly, fastener-free surface.

In the coming months, Grand Rapids, Mich.-based National Nail is expected to announce the details for the next round of the CAMO Screw Off.