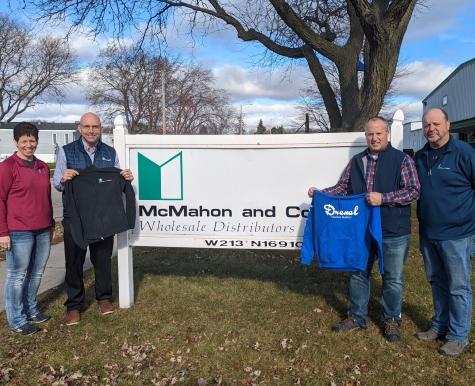 Leaders from Drexel Building Supply and McMahon and Company announce their merger.

Wisconsin prodealer Drexel Building Supply announced that it will be merging with McMahon and Company, a supplier of doors and millwork in the state.

The move is expected to be effective Dec. 31, according to Drexel.

McMahon Company was established in 1996 and is a family-owned business that employs approximately 50 people in Jackson, Wis. The company is known for its distribution of “millwork with a personal touch,” Drexel said.

Drexel plans to integrate the McMahon business into eastern, central, and north central Wisconsin to focus on efficiency and quality.

Patrick McMahon, Sean McMahon, Kim Mather, and the entire McMahon team, will remain a key part of the business as they grow and innovate to be the leader in doors, moulding, and finish materials.

All team members of McMahon will be offered careers at Drexel Building Supply as assets to the significant growth plans.

Future plans include growing into a new facility that will double capacity and employ 100 full-time, trained team members, poised to open sometime in 2024.

The operation will be known as Drexel Doors & Millwork. Plans for the location are still in development, with a myriad of opportunities possible, the dealer said.

The financial terms of the acquisition were not disclosed.

Drexel operates eight locations in Wisconsin. The dealer was the 2018 HBSDealer ProDealer of the Year award recipient.