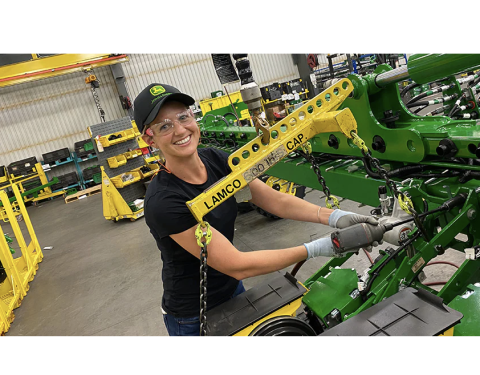 “John Deere is honored to give back to our nation’s veterans by helping them translate the breadth of valuable knowledge and skills they retained during active duty and develop them into a new career path,” said David Ottavianelli, director of workforce and community development at Deere.

Deere & Company announced an agreement with the U.S. Army Reserve Private Public Partnership Office, known as P3O, to help service members and their families access career opportunities as they transition to civilian life.

“This partnership not only helps our soldiers and their families at a critical stage in life but will also support growth within our local communities and business,” said Ottavianelli.

The partnership enables Deere to provide active-duty soldiers, who are transitioning into the U.S. Army Reserves, with meaningful education and skills that will make them top candidates for future potential employment.

The agreement with the U.S. Army Reserve builds upon the Department of Defense’s SkillBridge program, which helps place active-duty military members in civilian jobs during their final six months of military service.

With Reserve members facing unemployment rates two to three times the national average, said the firm, the internship allows veterans to receive on the ground training and industry education.

This training and education “can support overall mission readiness goals and enhance financial stability, as well as make them a better candidate for open positions.”

Active-duty service members, National Guard or Reserve veterans or spouses who are interested in John Deere opportunities and information about the SkillBridge program can learn more here.

Since Deere joined the SkillBridge program in August 2020, more than 395 active-duty service members and veterans have participated in filling critical roles within the company and throughout Deere dealerships.

P3O said it ensures Army Reserve Soldiers are succeeding in their civilian careers which directly benefits the Army and the nation by bringing substantial value and depth to the force.

“More than 87% of the force integrates military service with civilian careers, providing the Army with professional skills, education and expertise acquired in the private sector,” said P3O.