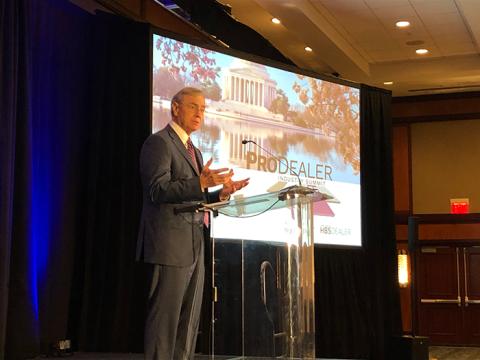 Rep. Blaine Luetkemeyer of Missouri at the ProDealer Industry Summit.

WASHINGTON, D.C. -- Three Congressmen took turns at the podium and delivered their concise takes on the economy, regulations, immigration and the ills facing America. And that was just the beginning of day two of the 2022 ProDealer Industry Summit.

The Washington Briefing Breakfast with Congressional Members was followed Thursday by a parade of administration officials presenting reports on matters of small business and issues facing the industry.

Highlights from the presentations include:

Rep. Adrian Smith (R-NE) - Zeroing in on rising U.S. inflation, Smith said too much money was injected into the economy "and they were warned we would face inflation. So here we are." Smith also pointed to workforce participation as a piece of the current supply chain problem.  "We need to make sure we have all hands on deck. The workforce shortage is part of the current problem," Smith said. "The job openings are there, the wages are there."

Rep. Blaine Luetkemeyer (R-MO) - Supply chain issues have hit close to home for the U.S. Representative. Luetkemeyer said he recently wanted to have a new barn door hung on his property. But after months of delays, and the contractor unable to show up with the door, Luetkemeyer took matters into his own hands. He contacted the maker of the door only to find out that the manufacturer would ship him the door once they actually received the materials needed to produce the door.

Rep. Rick Allen (R-GA) - The founder of a Georgia-based construction firm, R.W. Allen & Associates, Allen lamented the anti-business mindset prevalent that he sees in Washington, D.C.,  particularly among those he described as willing to sacrifice economic growth to reduce the country’s carbon footprint. “The problem with the economy is the new war on fossil fuel,” he said. “In this town, it’s a religion.” Allen also railed against regulations that restrict businesses from bringing growth and employment to their communities. “The good news is this,” he said ‘There are elections every two years.”

Larry Minor, associate administrator for policy, Federal Motor Carrier Safety Administration (FMCSA) - While new federal standards have been put into place for new drivers seeking a commercial driver's license, more moves could be on the way. Minor said that the National Highway Traffic Safety Administration (NHTSA) is seeking comments for a proposal that would require automated emergency breaking (AEB) systems for heavy trucks. But the switch to the new breaking requirements could be a costly expense for small businesses, Minor noted.

Even though several states and jurisdictions have eased rules against marijuana, it remains strictly prohibited for truck drivers in the eyes of the DOT. In fact, marijuana is a leading cause of failed tests among the 83,283 DCL CLP holders who are currently on the prohibited lists, Minor said.

Gary Stanley, director, office of materials industries, U.S. Department of Commerce - While the LBM industry continues to face supply chain issues and a labor shortage, Stanley said the disruptions have been growing for some time. The impact of Covid, he said, brought to the surface the fragility of the supply chain. “These are not issues that surfaced because of Covid," he said. "they’ve been there for many years." He added: "There is no five-minute microwave bag of popcorn solution to this.”

Prianka Sharma, assistant chief counsel, office of advocacy, Small Business Administration -  When regulators limited the hours truck drivers could log on the road without a break, they weren’t thinking of carriers with cattle. A driver can’t just stop driving with livestock in the trailer. That kind of disconnect between regulations and business is the target of Advocacy intervention, which the SBA says helps small businesses save money. The agency attorney, one of 15 in the office, encouraged small businesses to participate in the intervention process by communicating how certain rules will raise costs or otherwise affect their business, and tell the agency what other options or alternatives.