The fifth anniversary of an LBM mega deal coincided with the second-quarter earnings call for the Dallas-based Builders FirstSource. And CEO Chad Crow looked back at the acquisition of ProBuild Holdings with a sense of corporate accomplishment.

“Today marks our 5-year anniversary of our acquisition of ProBuild,” he told investors during the earnings call. “When I think back at what we have accomplished and the great company that we have become as a result of that acquisition there is much to be proud of.”

The word “acquisition” he said doesn’t fit the spirit of the deal. He explained: “What we accomplished was only possible because thousands of our team members from both companies chose to forget which jersey they were wearing prior to July 31, 2015 and rolled up their sleeves and said let’s get this thing done, and they did.”

A lot of people thought we were crazy and would never survive.
Chad Crow

Crow added that there were many doubters, as Builders FirstSource was more than six times levered when the deal closed. “A lot of people thought we were crazy and would never survive,” Crow said. “From the start, we said our top priorities were to deliver, to integrate and to achieve our synergy target, and we did that plain and simple.”

Crow thanked team members, as well as “those who invested in us five years ago.” He concluded his remarks on the major merger by saying: “Now the time for reflection is over. Everyone back to work.”

Crow announced in early 2020 that he intended to retire from Builders FirstSource sometime during the year. 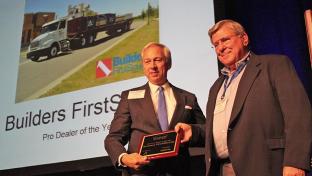