The use of pressure treated lumber in California is as popular as ever for decks, fences, and retaining walls.

The latest challenge to California’s lumber and building materials industry has surfaced in the form of regulations for the disposal of pressure treated lumber waste.

Following California Gov. Gavin Newsom’s veto of 2020’s Assembly Bill 68, treated wood waste must be disposed of at Class I Hazardous Waste Landfills. The action took place on Jan. 1 and came as a surprise to many in the industry.

According to the West Coast Lumber & Building Material Association (WCLBMA), which represents California’s lumber dealers, commercial haulers have already notified the state’s Department of Environmental Health that they will be rejecting loads where they see treated wood in waste containers.

But finding a designated landfill for proper disposal is no easy matter.

“There is not a convenient way for people to deal with offcuts of pressure treated lumber from jobs including something as simple as building a fence,” says Augie Venezia, government affairs chair of the WCLBMA and the president of Fairfax Lumber & Hardware.

“The toxic disposal sites are few and far between,” Venezia told HBSDealer.

Venezia recently conducted a state search to find the closest hazardous disposal site near his business in Fairfax, Calif. The nearest location he came up with is four-and-a-half hours away in Buttonwillow.

“I know they are out there, but I don’t where they are,” Venezia says.

And that’s going to be a problem for other lumber dealers and builders throughout the state. A state variance previously allowed for landfills to accept pressure treated waste.

The other issue is pressure treated lumber remains as popular as ever among home builders and remodelers in California. The cost is lower than redwood and it performs better for uses with ground contact. That includes decking, fences, mudsills, and retaining walls.

Alleviation to the sudden quandary could be on the way, however.

The California Department of Toxic Substances Control (DTSC) is looking to provide a new variance until state lawmakers find a new solution to the problem.

Additionally, several of the state’s lawmakers have proposed AB-332, a new bill that would reestablish previous disposal standards and act as a deterrent to illegal dumping.

In the meantime, here’s what the DTSC has said about how treated wood wasted should be prepared for disposal: 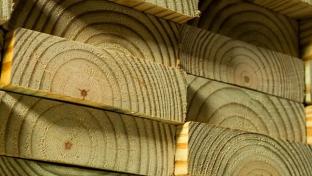