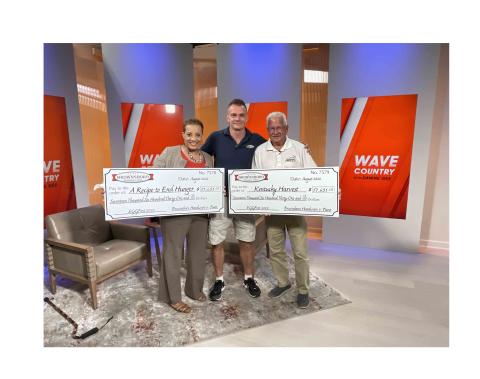 Brownsboro Hardware owner Doug Carroll stands with representatives from Kentucky Harvest and A Recipe to End Hunger. “Thanks to you, we raised a record $35,263.16,” he said.

Brownsboro Hardware and Paint’s annual EggFest event raised a record amount in 2022. More than $35,000 will be going to two local food-related charities.

“This is a phenomenal amount of money raised, and we could not be more pleased,” said Doug Carroll, owner of Brownsboro Hardware & Paint.

“We are grateful to the people who made it happen – the cooks, the chefs, the sponsors and all those who attended EggFest 2022. We feel an obligation to give back to the community, and together, we have once again been able to make a difference.”

A total of $35,263.16 was split between Kentucky Harvest and A Recipe to End Hunger. Both checks – $17,631.58 for each charity – were presented to representatives of the two food-related charities.

“This is a huge benefit for Kentucky Harvest,” said Heather Stewart, executive director of Kentucky Harvest. “Our trucks pick up and deliver food 365 days a year. With increasing costs and gas prices, this money will help keep our trucks running and the food going to where it’s needed most.”

“100 percent of these funds raised by Brownsboro Hardware & Paint will go right back into the community and into the bellies of those in need, just like all of the money we raise,” said Dawne Gee, founder of A Recipe to End Hunger.

The hardware’s annual Big Green Eggfest is a food festival and cooking competition with all food cooked on a ceramic charcoal barbecue cooker called, “The Big Green Egg,” sold at Brownsboro Hardware.

“We started EggFest 13 years ago simply as a way to sell more Big Green Eggs. However, since that time, it has become a true community event, attracting more than 1,500 people each year,” said Carroll.

“Also, during that time, we realized that it could be a valuable fundraiser for people in this area who are less fortunate. It became obvious that as EggFest was feeding people who attended, the proceeds also should go to feed people who don’t always know where their next meal is coming from,” said the owner.

“The fact that we have been able to raise around $300,000 in that time has been incredibly gratifying,” said Carroll.

Next year’s annual event has been scheduled for August 4-5, 2023, said Brownsboro Hardware.