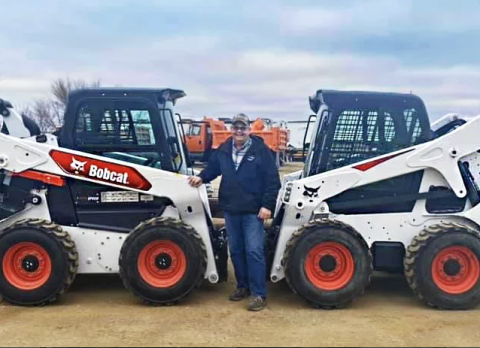 Farmer Brian Bjork proves age doesn’t mean you have to stop doing what you love.

Around the turn of the last century – about 1898 – the Bjork family farm was established near Dunbar Township, North Dakota.

Four generations later, Brian Bjork carries out his family legacy on that same farmstead. “I grew up on the farm, and that’s all I wanted to do.”

Now in his 60s, Bjork considers himself “semi-retired” still actively farming 575 acres of corn and soybeans. He has scaled back from 1,400 acres but isn’t quite ready to give up his passion, even as tasks become harder on him than before.

His secret is a remotely operated skid-steer loader. “Since I farm by myself, it’s key for lifting heavy stuff up off the ground. Without it, I’d probably have bruised knuckles from trying to use a handyman jack,” said Bjork.

Being able to safely operate his loader from outside the cab is a game-changer. “I used to grab onto whatever I was loading and grunt and hope that my back would hold out,” Bjork said. “But now, I just set something on a pallet and use the Bobcat loader to put it in my pickup.”

Not only does the remote operation save his back, but it also speeds up daily chores without compromising safety, said the company.

He stands to the side to keep an eye on things — whether pushing a trailer into his barn or lifting a heavy load — while effectively controlling the loader and boom functions from his phone, said Bobcat.

“Now that I have the MaxControl system, I wouldn’t be without it,” said Bjork.

With a remote operation system, age doesn’t mean you have to quit doing what you love.