When Builders FirstSource and BMC Stock Holdings announced they were combining companies last week in the largest pro dealer merger ever, the lumber and building material distributors created a super dealer with annual sales of $11.2 billion.

A combined Builders FirstSource and BMC, having sales of $7.5 billion and $3.8 billion before the merger, positions the new company as the second-highest ranking company among pure building products distributors serving home builders, contractors and remodelers.

ABC Supply, the Beloit, Wis.-based roofing and building materials distributor remains at the top spot with sales of roughly $11.7 billion and well over 700 locations. But ABC does not deliver lumber or offer residential framing services. 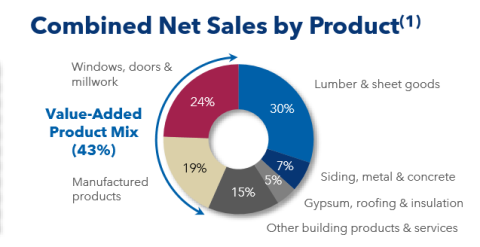 The new company said it will capture about $4.8 billion in sales from value-added products, including $2.7 billion from windows, doors and millwork and $2.1 billion from pre-fabricated trusses and components.

Traditional lumber and sheet goods will account for 30% of overall sales, or roughly $3.36 billion.

Annual cost synergies at the new company are forecast to between $130 million and $150 million by year three of the deal.

"A larger platform will strengthen our ability to create or invest in best in class innovative solutions that deliver significant benefits to customers,” said Builders FirstSource CEO Chad Crow.

The new powerhouse, with a combined 235 value-added product facilities and 452 LBM facilities, extends its reach into 214 of the top markets in 42 states. Individually, Builders FirstSource served about 201 markets while BMC operated within 45 markets.

Prior to the merger, Builders FirstSource and BMC have acquired 22 companies in the past 10 years. 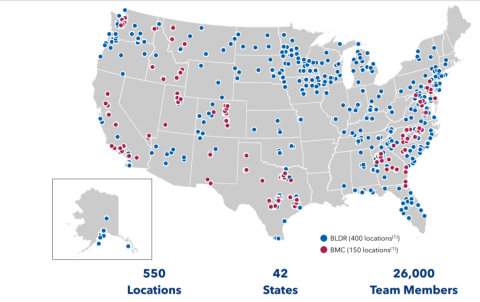 Questions about leadership have also been answered. Crow announced earlier this year that he was stepping down as CEO of Builders FirstSource. But the companies had to look no further than BMC CEO Dave Flitman for the top executive of the new entity.

"Earlier this year I announced my intention to retire once we identified my successor," Crow said. "I believe we have found the best fit possible in BMC’s Dave Flitman."

Looking ahead, and taking into account the increased scale of the company, larger market penetration, and geographic diversity, Flitman says the dealer is poised to expand even further. “Overall, we’ll have a leading operation poised for future growth as the fragmented market continues to consolidate.”

“We will significantly improve our ability to service key high-growth markets in the South, Southeast and West regions, which represent over three-quarters of U.S. single-family housing starts and more than 85% of our combined revenues," Flitman explained.

Crow will remain with the company for roughly 90 days after the closing of the transition with Builders FirstSource CFO Peter Jackson remaining as the lead financial executive of the merged company.

The company will be branded as Builders FirstSource once the merger closes in the fourth quarter and trade on the BLDR ticker symbol.