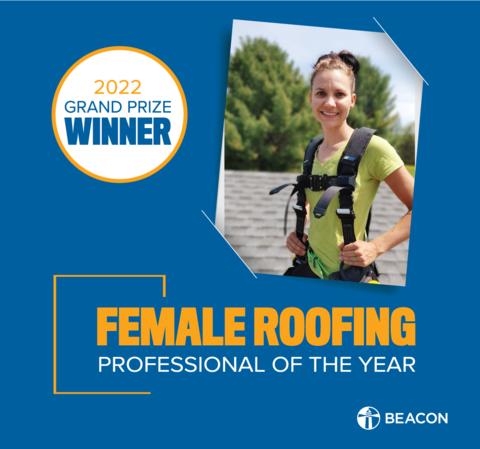 Beacon announced that Michelle Mulder, owner of Nailed It Roofing in North Bay, Ontario, Canada is the winner of Beacon’s annual North American Female Roofing Professional of the Year competition.

The program shines a spotlight on inspiring women in the roofing industry across the U.S. and Canada.

Mulder has enjoyed hands-on work since taking shop classes in high school, where she looked forward to a career in the trades.

“I’m grateful for the support I received from my local community and my colleagues,” Mulder said. “It’s an honor to receive this prestigious award. I applaud Beacon for its support of women in the industry and I hope my story inspires other women to become trailblazers.”

As a woman, she said that she found it difficult to be hired in construction after high school, so she enrolled in the Renovation Techniques Construction Carpentry Program at Canadore College. Upon graduating in 2005, she was hired as a carpenter, framing houses and sheathing roofs.

Learning more about the on-site trades, she grew a passion for roofing. In 2015 Michelle started her own business, Nailed It Roofing, which has been one of the top roofing companies in her region for the past seven years.

“We were thrilled to receive hundreds of submissions demonstrating women’s impact on the roofing industry,” said Julian Francis, Beacon president and CEO. “It’s a privilege to recognize Michelle for her hard work and determination in leading the way for women in the roofing sector. The public rallied to vote for Michelle, recognizing her work on the jobsite and her devotion to mentoring young women in the community.”

From March 8 through April 11, Beacon solicited the nomination of outstanding female roofing professionals. Beacon opened voting to the public from May 16 through June 6. The other top four finalists were:

To learn more about Beacon’s annual Female Roofing Professional of the Year competition, the deserving finalists, and the official contest rules, visit: go.becn.com/femaleroofpro.

Based in Herndon, Va., Beacon is a publicly-traded distributor of roofing materials and complementary building products in North America, operating over 400 branches throughout all 50 states in the U.S. and 6 provinces in Canada.

Beacon serves an extensive base of over 80,000 customers.