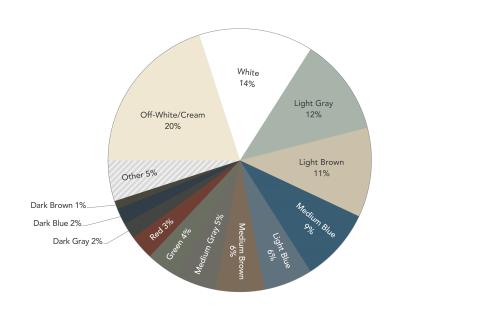 Results of Alside's "Color of the Year" siding survey.

While the industry’s top paint manufacturers have forecasted some of the hottest tones and colors of 2023, siding experts from Alside are weighing in on exterior trends for next year.

Alside commissioned a national survey conducted online by the Harris Poll to predict the top siding color choice based on insight into consumer preferences and increasingly popular exterior home designs. The survey was conducted online within the United States Sept. 15-19, among 1,404 U.S. homeowners ages 18 and older.

The results found the majority of homeowners would lighten up their exteriors with trending neutral colors.

If homeowners were going to update the color of their home exterior in 2023, the most popular choice identified by the survey would be off-white/cream (20%) followed by white (14%), the surrey found. According to Alside, this trend was across the board, with male and female homeowners responding similarly for off white/cream and similar feelings across the various regions of the country.

Alside found the results from the national survey were in line with its online analytics and sales data that show increasing popularity in white compared to other colors. In fact, the percentage of total white squares sold by Alside has more than doubled since 2018. 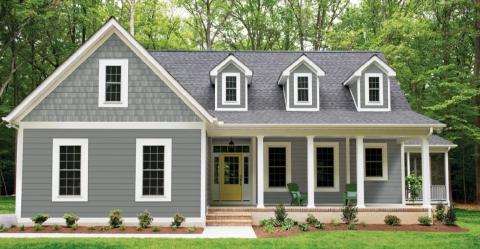 “It’s interesting to compare the national survey data to what we’re seeing in the market,” said Chase Creighton, Alside business director, vinyl and composite cladding. “The farmhouse trend is driving more of the preference of homeowners choosing white and light colors. It’s possible, too, that cost may be a driver. As building materials prices have risen, consumers may have gravitated toward lower cost options and away from premium colors.”

Alside said it provides an expansive color offering and delivers fade-resistance protection to provide the beauty and durability consumers need to create the perfect look for their home.

“Whether a homeowner’s palette includes soft shades of white or bold architectural hues, the impact of color sets the tone while unifying the details,” Creighton added.

Based in Cayahoga Falls, Ohio  Alside also has more than 100 company-operated supply centers across the United States and provides installation services, serving as a partner to contractors, remodelers, builders, and architects for building products and services.