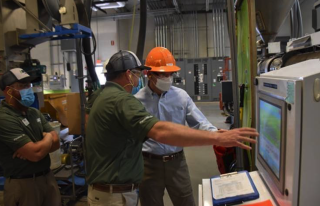 The lead Republican negotiator of the bipartisan infrastructure legislation that recently passed the U.S. Senate toured the company and met with employees.

Portman’s office released the following statement: “I had a great visit today to ADS, where we discussed how the funding in the Infrastructure Investment and Jobs Act will help rebuild and maintain our nation’s roads and highways,” said Senator Portman. “I also appreciate their support for my RECYCLE Act, which was also included in the bill. We discussed how improving how our nation recycles is good for their company, the economy, and our environment.”

According to the senator, companies like ADS could benefit from the $110 billion in new spending over the next five years to construct, rebuild and maintain our roads and highways.

“At ADS we understand why using recycled content is financially beneficial, but also the right thing to do for our environment and our customers,” said Scott Barbour, ADS President and CEO. “There is already good use of our products in roads, railways and other infrastructure projects, and we look forward to working with Senator Portman as we help to improve the environments and lives of people everywhere.”

The  RECYCLE Act authorizes a new federal grant program through the Environmental Protection Agency (EPA) to help educate households and consumers about their residential and community recycling programs. The RECYCLE Act was included and fully funded at $15 million per year over five years as part of the infrastructure legislation. ADS recycles 510 million pounds of recycled plastics every year to construct high performance pipes and ancillary products, making them the second largest plastics recycling company in North America.