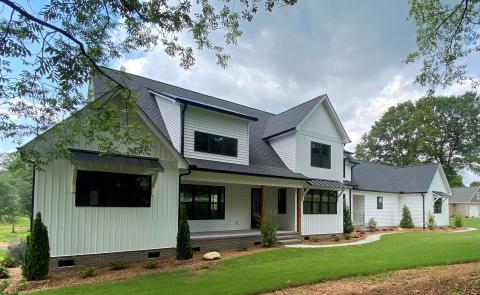 A home featuring siding from Kaycan.

ABC Supply announced that it has acquired the U.S. distribution business of Kaycan, a manufacturer and distributor of siding and other building materials, from Saint-Gobain.

The purchase includes 24 Kaycan locations and pushes ABC Supply to more than 860 locations across 49 states.

The financial terms of the acquisition were not disclosed by ABC Supply.“The acquisition of Kaycan’s U.S. distribution business will enhance ABC Supply’s product and service offerings and provide momentum for our next phase of growth,” said Keith Rozolis, ABC Supply’s president and CEO. “We are excited to welcome Kaycan’s associates into the ABC Supply family."

The company, which operates in both the United States and Canada, has revenue of $472 million across the two countries. Kaycan was acquired by Saint-Gobain in July 2022.

ABC Supply was founded in 1982 and is based in Beloit, Wis. The company is one of the nation’s largest distributors of exterior and interior building products.

Activity at ABC Supply has been heavy in recent months.