Throughout 84 Lumber’s 65 year history, it has maintained a strong commitment to United States military members.

The pro dealer announced that it is continuing the tradition and hosting its sixth annual Operation Appreciation campaign this May in honor of Military Appreciation Month.

“Operation Appreciation is one of our favorite times of the year,” said 84 Lumber Vice President of Marketing Amy Smiley. “It means a lot to us to be able to set aside time to honor heroes from all of our communities across the country and to give back to those who have given so much.”

To kick off Operation Appreciation, 84 Lumber partnered with the Pittsburgh Penguins to host a Military Appreciation Game on April 20. The company also teamed up with the Penguins Foundation to provide 500 local military children with Hug-A-Hero dolls, customized stuffed dolls that have a picture of the child’s military hero, in hopes of bringing joy and comfort to these children.

The Penguins partnership served as a launch for several other military promotions that 84 Lumber is doing in May, including:

In addition to the month-long promotions, 84 Lumber honors veterans all year-round through a 10% discount for all military personnel and first responders. The company also has combat-wounded purple parking spots at every store nationwide and puts a strong emphasis on hiring former military members as well.

“Supporting America’s military is something that our company has been passionate about since the beginning,” said Smiley. “In previous years, we’ve given away a tiny house, awarded veterans with $8,400 to their local stores, launched partnerships with organizations like the Fisher House Foundation, and much more. We are honored to have the opportunity to thank our country’s heroes, and we look forward to dedicating the entire month to them this May.” 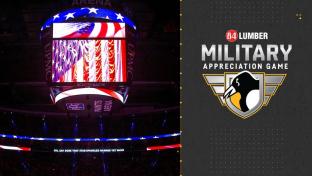